"Tell the truth and shame the devils." — Roldo Bartimole 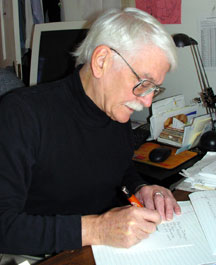 Cleveland Magazine called him "the poor man's Tom Paine." John Wicklein in the April 1, 1993 issue of Progressive referred to him as "Cleveland's Gadfly." Whether you consider him to be Cleveland's conscience or "Cleveland's curmudgeon," from 1968 to 2000 iconoclastic journalist, Roldo Bartimole, rocked Cleveland's political boat with his biweekly newsletter, Point of View. Read more about Roldo.